A Theatre Without A Theatre

The Village of Pecatonica has been without a community theatre since Pec Playhouse’s roof collapsed in February 2021. The loss of this downtown asset has had a negative impact on the community, and many believe that it is time to rebuild and rejuvenate Pecatonica’s local theatre company. A few of those believers decided to do something about it.

In May, four sisters with a passion for theatre and Pecatonica dubbed themselves Sisters4Theatre and crafted a plan to help the Pec Playhouse Theatre move forward in rebuilding – a project that was abruptly halted when a few voices raised issue with demolishing an old, obsolete, inoperable granary that the Playhouse owns. Out of respect for this opposition, the Theatre board began investigating alternative sites and considered seven, none of which were feasible due to cost, location, or availability. The board feels strongly about rebuilding on Main Street in Pecatonica and the community agrees. Based on a poll of 230 residents and visitors on May 30, 2022, 99.1% believe that a community theatre brings significant value to Pecatonica and 95.6% would like to see the theatre rebuilt in the downtown business district.

“It’s the ‘significant value’ that’s so relevant to rebuilding the Theatre,” said Pam Clark Reidenbach, one of the sisters working to jumpstart the rebuilding of Pec Playhouse. “It’s common for arts organizations to be an anchor of local business districts,” she said citing research conducted by the John D. and Catherine T. MacArthur Foundation. “As an anchor business, community theatres provide both economic and social impact.”

Pec Playhouse was founded in 1991 and has produced 30 consecutive seasons – 155 productions and more than 1,400 performances – of dramas, comedies, musicals, and specialty shows. This includes annual collaborations with Pecatonica High School from 1991 to 2014. As an all-volunteer organization, these productions required more than 247,000 volunteer hours.

The Playhouse’s ticketing data shows that the Theatre’s average annual audience equates to 4,472 patrons, each having spent an average of $11 per ticket. Over the course of 30 years, that adds up to approximately $1.5 million spent on tickets and if each patron spent an additional $11 in Pecatonica on show night, double that number for a total of approximately $3.0 million. The big spending comes from volunteers, with an estimated $6.0 million spent at the local restaurants, bars, shops, and gas station. “In addition, there’s a value to all that volunteer talent,” said Angela Mall Larson, another member of the sisterly quartet. “According to The Do Good Institute, the value of a volunteer hour is $27.20. That makes the economic impact of Pec Playhouse volunteerism equivalent to $224,046 annually and $6.7 million over the course of 30 seasons.”

Using the economic impact calculation methodology of Americans for the Arts, Pec Playhouse directly spends approximately $50,000 annually into the local economy and along with the spending of patrons and volunteers, the expenditures support 4.1 jobs in the community, equating to $86,980 in household income and $6,800 in local government revenue each year.

Along with this ongoing, economic impact, the building of a new theatre will generate additional financial benefits. Imagine an investment of $1.5-$2.0M in new construction on Pecatonica’s Main Street. A project of this size will employ 50-75 trades people at rates of $30-$45 per hour, along with locally purchased insurance benefits and other perks. In addition, these workers will patronize the local shops, gas station, restaurants, and bars for the 10–12-month duration of the construction. The building project must be initiated by February 2023 to collect the $100,000 held in escrow by the insurance company. That’s money that will not be invested in Pecatonica unless the Theatre rebuilds soon.

There’s much more than economics at stake. In its 30-year history, Pec Playhouse has forged hundreds of friendships, generated thousands of volunteer hours, and produced millions of laughs and smiles. The life-expanding experience of community theatre – from either side of the stage – is best captured in the words of Pec Playhouse volunteers. 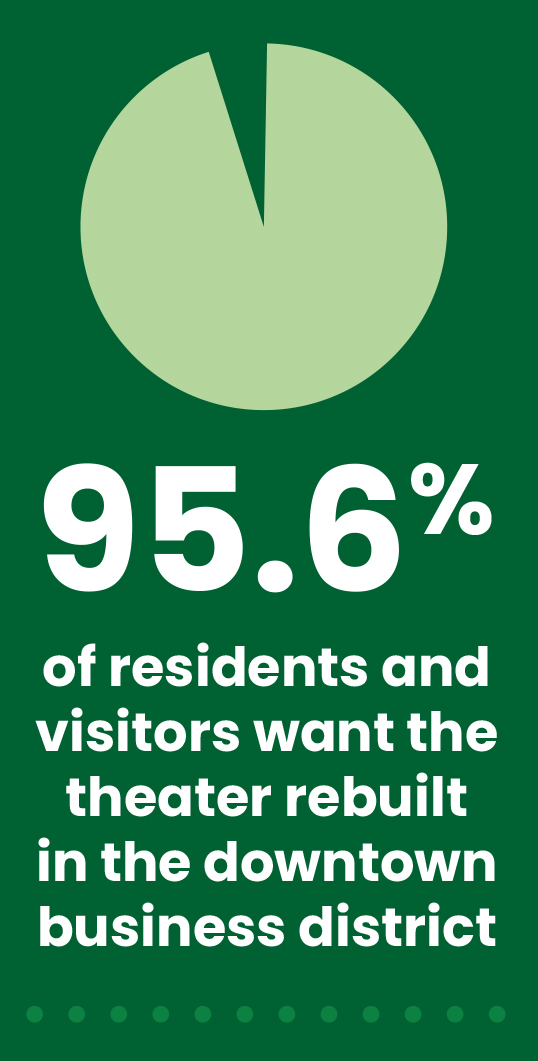 “I have loved my experiences at the Pec Playhouse as both an Actor and Director and as an audience member because of the aspirations to do first-rate productions, the commitment of all the volunteers, and the familial feeling of the casts and crews.”

“Pec Playhouse provided a springboard to not only get my family into an activity we could enjoy and participate in together, it also brought us in contact and friendship with other members of the community with similar interests and talents. That opportunity led to the birth of another community theatre in Byron, Illinois where talents are celebrated and enjoyed with and for all ages. I am proud to have the arts represented in my hometown through Pec Playhouse and am continually honored to be part of it on and off the stage.”

“Pec Playhouse has given countless volunteers the chance to work both in front of and behind the curtain alongside some wonderful people of all ages. Putting on a show takes many hours of hard work (and fun), and I am thrilled to have been a small part of that effort. Though no one is looking for a reward, you can’t help but feel good for yourself and the other volunteers when you talk to patrons who have seen a show.”

Based on the socio-economic impact analysis conducted by Sisters4Theatre, the rebuilding of Pec Playhouse sits squarely at the intersection of cultural and community development. The theatre must return as an anchor business in an already thriving downtown and once again contribute to a lively, diverse business district for the social and financial benefit of volunteers, visitors, and residents. 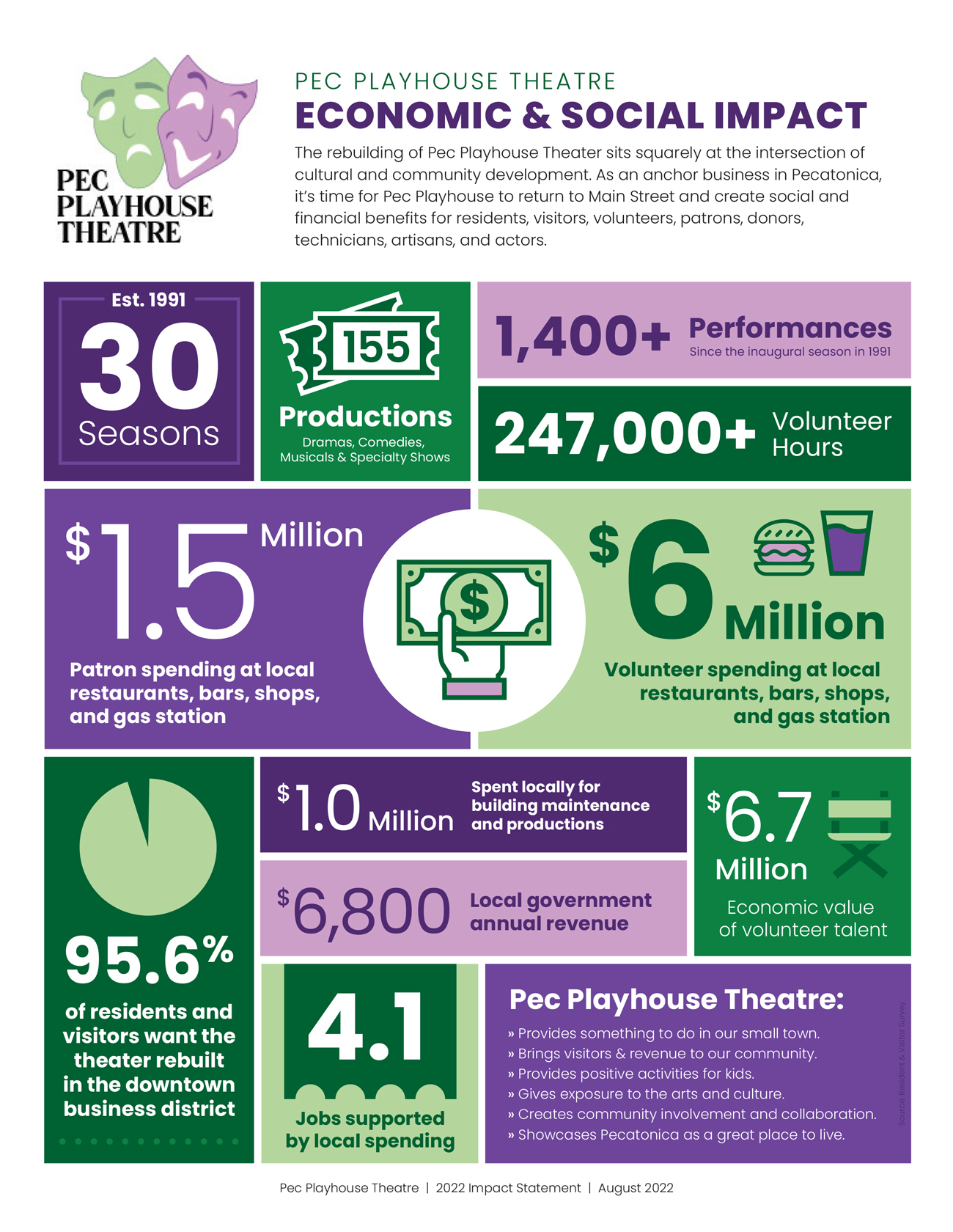 Sisters4Theatre is a loosely organized crew of women who tend to look on the bright side of life and choose to use their professional talents and personal passions to do good in the world. The founding quartet includes Pam Clark Reidenbach, Kim Clark Mathieu, Maureen Mall, and Angela Mall Larson. They’ve since been joined by a bevy of talented women who have volunteered to help jumpstart the building of a new theatre in downtown Pecatonica. When not working together for a cause, these instigators and collaborators are leading non-profits, organizing women’s scholarship events, and running successful businesses.